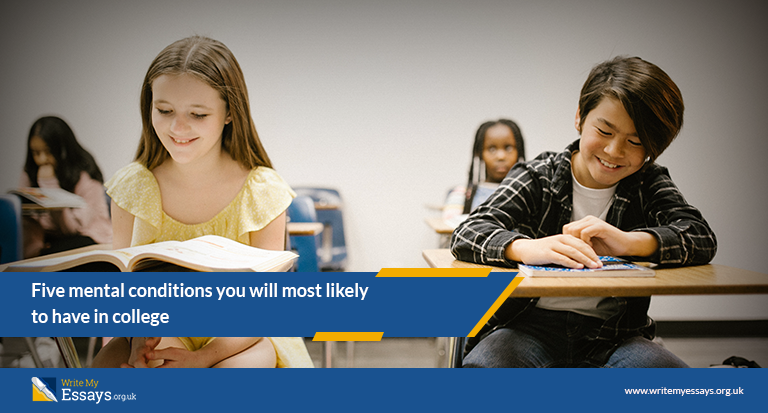 Five Mental Conditions You Will Most Likely To Have In College

The time is officially here when thousands of incoming newcomers are making their way to colleges with a baggage full of dreams, hopes, and excitement.

They must have prepared their bags with all the essentials. From their comfortable duvet to ramen noodles, but one thing most parents usually forget to pack with them is a tiny bit of advice; essential guidance about how to survive through mental conditions that they are most likely to encounter in college.

College is a place to love or a place to despise; there’s nothing in between! It is the breeding ground of various mental illnesses that crush students and make them suffer silently. If you’re not fully prepared, this place will most likely drive you nuts!

It’s a voracious battleground where a student perceives himself as a lone soldier fighting against the pressure bestowed upon them by society, a place where their supposed “future” is decided, where long life friendships are fumbled. Students fall in deep despair for making a stupid decision that probably haunts them forever!

Mental illness is a silent killer; no one knows it until the damage has been done! As per the 2018 and 2019 student survey conducted by the American College Health Association (ACHA), around 60% of participants noted “overwhelming” anxiety, whereas 40% experienced depression so critical that they had struggle functioning.

Pennsylvania State University conducted another research in 2019 and estimated that the demand for campus mental health services soared by 30-40% during a time when only a 5% increase in enrolment was observed.

As a matter of fact, mood disturbances indicate only a fraction of prevalent mental health conditions experienced by college students. Some of them include serious problems such as suicide, eating disorders and substance addiction.
Mental healthcare professionals repeatedly emphasised the necessity of discussing such issues, but students tend to perceive these issues as a regular aspect of college life.

In this blog, we are going to dive a bit deeper and bring forward the information to help students identify potential mental health issues. Scroll down and discover five mental issues that you would most likely experience at college.

1. Depression: The Most Underrated Issue

One of the most underrated and prevalent mental issues among college students is depression. Sadly, people don’t usually give it much of the attention than it deserves until the situation gets worse. Almost every student, at some point, experiences depression from a minor to major levels depending on their current situation. A newcomer would be facing minor levels of depression, while a student stuck with his/her thesis might be at an alarming level of depression.

There are a few things that would help you to fight back
● College is not the place to be egoistic, drop our ego on your way in.
● Just don’t make the campus your comfy sleeping place, don’t just sleep anywhere except your room.

Watching all your friends having the time of their lives with good grades and amazing social life, while you are struggling with both. The fact that most people fail to admit is that social anxiety is a real thing!

Students find themselves in a state of darkness and despair when they compare their lives to everyone. They think that they are not good enough while everyone else is living the life that they’ve desired.

We tend to compare our progress with other people that usually result in shattered confidence and alarming levels of anxiety. This is not how things should be; hence, you can do the following things to avoid your anxiousness:
● Don’t compare yourself with others
● You’re the author of your own story, hence, don’t let anyone decide what best for you! Do what you’d like to do, and nothing matters!
● Remember: this time is just temporary, it wouldn’t be so long to turn things in your favour. So, cling to the last bit of hope no matter what!

3. The Fear Of Crowd

Some people are comfortable among the crowd and love being among friends to have fun, whereas, there is another clan of students who are just opposite. People who are suffering from Agoraphobia usually struggle in a crowded place, and college makes the situation worse.

From clustered classes to a crowded cafeteria, you will always find yourself around people at all corners. To avoid being in such a situation, there are these few things that might help you.
● Don’t get a room on campus, live off-campus.
● Gyms are always crowded, visit early morning to avoid the interaction.
● Night classes are the best way to avoid people, enrol in evening classes.

Every student hates to admit it, but yes, adult movies addiction is a thing that needs our imminent attention! You might be wondering how a student would have such an addiction, but research actually backed this claim, proving that early exposure to such movies resulted in critical addiction. As many as 93.25% of boys and 62.1% of girls first watch adult movies before they turn 18, and by the time they reach college, the situation gets worse, and they get addicted to it.

A college is a place where you find a zombie-like student roaming around hallways with dark bags under their eyes. When so much is already going on the campus, from consecutive quizzes to shit loads of assignments to exam preparation, who gets the time to sleep anyway?

Almost every student tends to pull all-nighter in order to do things on time, which for the record, do more damage than good and leads to Insomnia. It’s high time that students and teachers should stop glorifying all-nighter culture once and for all.

Here are a few things to do:
● Don’t major in Science.
● Follow a proper sleeping pattern.
● Care less about grades more about your inner peace.
● When struggling with assignments, reach out to various academic writing services online and say to them, write my essay UK.
● Don’t forget to flex muscles other than your brain!

Five Mental Conditions You Will Most Likely To Have In College

Six Habits That Can Sabotage Your Productivity In College